Azure Container Apps offers a serverless approach to publishing microservices without the need to use Kubernetes. In this tutorial we demonstrate the publication of two microservices developed using the DevPrime platform.

The image below demonstrates how the final environment will look after we start all the procedures for creating the environment and publishing the microservices.

Items needed in your environment

In this article we will use two microservices built by DevPrime and implemented as presented in the article Asynchronous Microservices Communication. You can pre-run the cited example or go straight to the code provided by github.

This project uses powershell and bicep-based scripts to create the Azure Container Apps environment in Azure. You can adapt the scripts as needed.

a) Run a project clone on github
git clone https://github.com/devprime/azure-container-apps-bicep
b) Check the home folder with the Order and Payment items. Each folder of this folder has a microservice development with the DevPrime platform. 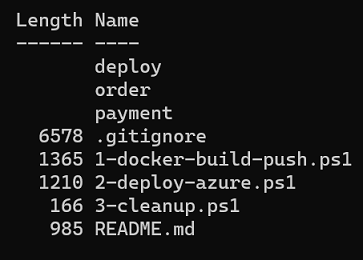 Local database and stream credentials
To run the microservice locically by adding the credentials of a mongodb database and a kafka cluster in the project order and payment project by editing the file ‘appsettings.json’ as example below. At deployment we will use azure environment credentials.

[Environment variables]
When you run the Order and Payment microservices on the Azure Container Apps instance, you must configure the environment variables. This procedure is very similar to the one used in Docker and Kubernetes and you can have a preview in the image below. 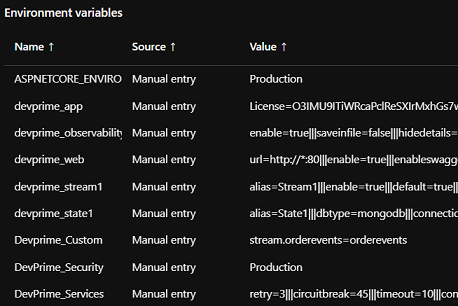 In this example we will not change other settings. If you need to set more parameters for your application repeat the procedure the other keys.

Running environment creation in Azure Container Apps
We’ll run the scripts so you can follow up step by step. In the end if all goes well you will already have in the logs the azure container apps url and consult the services in the Azure portal.

a) We will start with the creation of Azure Resource Group, Azure Container Registry (ACR), Docker Build and Push services for the private response in ACR.
.\1-docker-build-push.ps1

The urls below are examples of the accesses made available. Get yours.

When you post the Order API it will process the business rule, persistence in mongodb (Azure CosmosDB), and then issue an event through Kafka (Azure EventHub).

The second microservices will govern to the event and carry out its natural processing cycle according to the implemented business rule.

Excluding the entire environment created
To delete all services created in Azure run the script below. Before confirming, make sure about the name of the Resource Group created in this demo
.\3-cleanup.ps1

Suggestion for next steps

How to deploy Azure Container Apps with Bicep